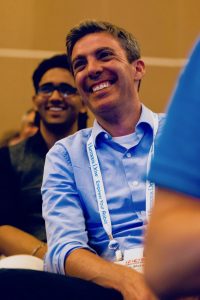 Joshua Marshall, PhD, PEng, was born in Iqaluit (ᐃᖃᓗᐃᑦ) and was raised in St. Lucia (Caribbean), Edmonton, Winnipeg, and North Bay. He is a multi-disciplinary engineering scientist, educator, and technical consultant with expertise in systems control engineering, mobile robotics, autonomous driving, vehicle navigation and mapping.  He has a special interest in and experience with heavy vehicle automation, particularly in mining, space, and defence, as well as in other harsh-environment applications.

Dr. Marshall earned his doctoral degree in electrical and computer engineering, specializing in systems control, from the University of Toronto in 2005.  He joined Queen’s University in 2010 and has been instrumental in building the multidisciplinary Offroad Robotics research group and, most recently, leading the collaborative Ingenuity Labs Research Institute as its inaugrual Director.  He is also a founding member of the NSERC Canadian Robotics Network (NCRN). In 2016-17 he was the KKS International Visiting Professor of Computer Science at the Centre for Applied Autonomous Sensor Systems (AASS) in the School of Science and Technology at Örebro University, Sweden. Prior to joining Queen’s, Dr. Marshall was an Assistant Professor in the Department of Mechanical & Aerospace Engineering at Carleton University and, before that, he served as an R&D/Control Systems Engineer on both space and terrestrial robotics projects at the robotics firm MacDonald, Dettwiler, and Associates (MDA), Inc., where he worked on field and mobile robotics projects for industry clients in Canada, the US, Australia, and in Europe.

Dr. Marshall is a Senior Member of the IEEE.  He served as an elected Associate Editor from 2017-20 to the Conference Editorial Board (CEB) of the IEEE Control Systems Society (CSS) and as an Editor for the IEEE/RSJ International Conference on Robots and Systems (IROS) from 2017-21. He has also served on three occasions as co-organizer of the Control and Robotics Symposium of the IEEE Canadian Conference on Electrical and Computer Engineering (CCECE) and, from 2018-20, as a member of the IEEE Medal for Environmental & Safety Technologies Committee.  Dr. Marshall currently serves as a Technical Editor for the IEEE/ASME Transactions on Mechatronics.

At Queen’s, Dr. Marshall is also cross-appointed to the Department of Mechanical & Materials Engineering and to The Robert M. Buchan Department of Mining where he supervises graduate research.  His work is featured in the From Earth to Us exhibit at the Canada Science and Technology Museum and has been commercialized through companies such as Epiroc AB and RockMass Technologies, Inc.  Dr. Marshall is also a licensed Professional Engineer in the province of Ontario and has served as a Program Visitor and Vice-Chair on multiple program accreditation site visits for the Canadian Engineering Accreditation Board (CEAB) of Engineers Canada.

Josh and his wife Jill live in Kingston where they are the proud parents of Owen, Maeve, and Finn.  For more information about Dr. Marshall and his research, visit the Offroad Robotics website and the Ingenuity Labs website.

A. Farley, J. Wang, and J. A. Marshall. How to pick a mobile robot simulator: A quantitative comparison of CoppeliaSim, Gazebo, MORSE and Webots with a focus on accuracy of motion. To appear in Simulation Modelling Practice and Theory, accepted July 4, 2022.

L. Khaleghi, U. Artan, A. Etemad, and J. A. Marshall. Touchless control of heavy equipment using low-cost hand gesture recognition. In the Special Issue on An End-to-end Machine Learning Perspective on Industrial IoT of the IEEE Internet of Things Magazine, vol. 5, no. 1, March 2022. DOI: 10.1109/IOTM.002.2200022.

H. Fernando and J. A. Marshall. What lies beneath: Material classification for autonomous excavators using proprioceptive force sensing and machine learning.  In the special issue on Smart Operation of Heavy Construction Equipment in Automation in Construction, vol. 119, November, 2020. DOI: 10.1016/j.autcon.2020.103374

M. Pasternak and J. A. Marshall. On the design and selection of vehicle coordination policies for underground mine production ramps.  To appear in International Journal of Mining Science and Technology, vol. 26, no. 5, September 2016. DOI: 10.1016/j.ijmst.2016.05.014

C. Ingram and J. A. Marshall.  Evaluation of a ToF camera for remote surveying of underground cavities excavated by jet boring.  In Automation in Construction, vol. 49, Part B, pp. 271-282, January 2015.

C. McKinnon and J. A. Marshall. Automatic identification of large fragments in a pile of broken rock using a time-of-flight camera.  In IEEE Transactions on Automation Science and Engineering, vol. 11, no. 3, pp. 935-942, July 2014.

J. A. Marshall and T. D. Barfoot. Global position and orientation estimation system for a vehicle in a passageway environment.  European Patent Application No. EP 2 450 763 A1, filed July 26, 2006.

U. Artan, H. Fernando, and J. A. Marshall. Automatic material classification via proprioceptive sensing and wavelet analysis during excavation.  In Proceedings of the 2021 IEEE/ASME International Conference on Advanced Intelligent Mechatronics (AIM), Delft, The Netherlands, July 12, 2021.

O. Mayuku, B. F. Surgenor, and J. A. Marshall. A self-supervised near-to-far approach for terrain-adaptive off-road autonomous driving.  In Proceedings of the 2021 IEEE Conference on Robotics and Automation (ICRA), Xi’an, China, May 30, 2021.

U. Artan and J. A. Marshall. Towards automatic classification of fragmented rock piles via proprioceptive sensing and wavelet analysis. In Proceedings of the 2020 IEEE Conference on Multisensor Fusion and Integration, Karlsruhe, Germany, September 2020. DOI: 10.1109/MFI49285.2020.9235261

J. von Tiesenhausen, U. Artan, J. A. Marshall, and Q. Li.  Hand gesture-based control of a front-end loader.  In Proceedings of the 33rd IEEE Canadian Conference on Electrical and Computer Engineering (CCECE), London, ON, May 2020.

R. Hewitt and J. A. Marshall. Towards intensity-augmented SLAM with LiDAR and ToF sensors. In Proceedings of the 2015 IEEE/RSJ International Conference on Intelligent Robots and Systems (IROS), Hamburg, Germany, September 2015.  DOI: 10.1109/IROS.2015.7353634

C. Watson and J. A. Marshall.  Towards extracting absolute roughness from underground mine drift profile data. In Proceedings of the 37th International Symposium on the Application of Computers and Operations Research in the Mineral Industry (APCOM 2015), Fairbanks, AK, May 2015.

M. J. Gallant, J. A. Marshall, and B. K. Lynch.  Estimating the heading of a Husky mobile robot with a LiDAR compass based on direction maps.  Invited paper in Proceedings of the 2014 International Conference on Intelligent Unmanned Systems, Montreal, QC, September 2014.

C. Ingram and J. A. Marshall.  3D time-of-flight camera for surveying remote cavities mined with a jet boring system.  In Proceedings of the 30th International Symposium on Automation and Robotics in Construction and Mining, Montreal, QC, August 2013. Best paper award!

J. V. Simela, J. A. Marshall, and L. K. Daneshmend.  Automated laser scanner 2D positioning and orienting by method of triangulateration for underground mine surveying.  In Proceedings of the 30th International Symposium on Automation and Robotics in Construction and Mining, Montreal, QC, August 2013.

A. A. Dobson and J. A. Marshall. Autonomous digging: Reducing the impact of communications delay for planetary mining. Presented at the Planetary and Terrestrial Mining Sciences Symposium (PTMSS), Montreal, QC, May 2015.

D. Haviland and J. A. Marshall. Simulation of traffic flow in underground mine ramps. Presented at the CIM Conference & Exhibition, Edmonton, AB, May 2012.

M. J. Gallant, A. Ellery, and J. A. Marshall. Exploring salience as an approach to rover-based planetary exploration. In Proceedings of the ASTRO 2010 Conference, Toronto, ON, May 2010.

M. A. Swartz, A. Ellery, and J. A. Marshall. Towards adaptive localization for rover navigation using multilayer feedforward neural networks. In Proceedings of the ASTRO 2008 Conference, Montreal, QC, May 2008.

A. Dellah, P. M. Wild, B. W. Surgenor, and J. A. Marshall. A laboratory on the microprocessor control of a floating ping-pong ball. Poster given at the 2000 ASEE Annual Conference and Exposition. St. Louis, MO, June 2000.

J. A. Marshall. The robot revolution is here: How it’s changing jobs and businesses in Canada.  In The Conversation, February 23, 2021.

R. Hewitt and J. A. Marshall. State of the Art on SLAM, vehicle dynamics and feature detectors for LiDAR sensors. Technical report issued to the European Space Agency (ESA) under contract 4000108490/13/NL/PA, December 6, 2013.

J. Peck, J. A. Marshall, and R. A. Hall. Overview of Automation in the Mining Industry and Recommendations for Orica’s Future Technology Focus. Report issued (in cooperation with LNH Technologies) to Orica Limited, November 2008.

J. A. Marshall. Development of an Instrumentation and Data Acquisition System for Rock and Mine Backfill Testing. B.Sc.(Hons.) Thesis, Department of Mining Engineering, Queen’s University, Kingston, ON, May 1999.